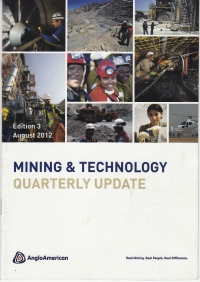 A quarterly newsletter for the technical department of multinational mining company Anglo American. I was responsible for project management, sourcing material and images, interviewing, research, writing and liaising with designers.

"The nomination process for the annual Applaud Excellence Awards is always a time of joyful reflection. The nominations demonstrate the depth of talent in our organisation, ranging from massive team projects to value-adding individual contributions. Mining & Technology features prominently in the nominations list. I am proud and privileged to be part of a team that is involved in a wide array of single and cross-discipline activities.

Some projects span years, such as the suite of 43 Group Technical Standards that Keith Wainwright and a multidisciplinary team developed and the Exploration Leadership Development Programme that Debbie Marshall has developed from scratch.

Some projects have given the Group quick wins, such as the TOP open-pit design tool developed by a team of Anglo American and outside stakeholders under the leadership of Mike Livingstone-Blevins. TOP, amongst others, reduces design time by more than 80%.

Other projects are paving the way to increase our sustainability over the long term, such as the global collaborative comminution project, steered by Paul Dempsey, which led to the establishment of the Anglo American Centre for Sustainable Comminution at The University of Queensland in Australia.

Let me not get carried away – I am sure that you have seen the full list of nominations and share my pride of working with dedicated people. Many of you deserve applause, but, unfortunately the Applaud nominations are restricted to the most outstanding projects.